The uniforms of the American branches include an image of the US flags. It may look backward to some, but the backward look is part of the US Flag Code.

So, Why Is The American Flag Backwards On Military Uniforms? The goal is to make the flags appear fluttering in the breeze while the person wearing them walks ahead.

If you want to know more about the details, we will guide you through everything you need to know about this! 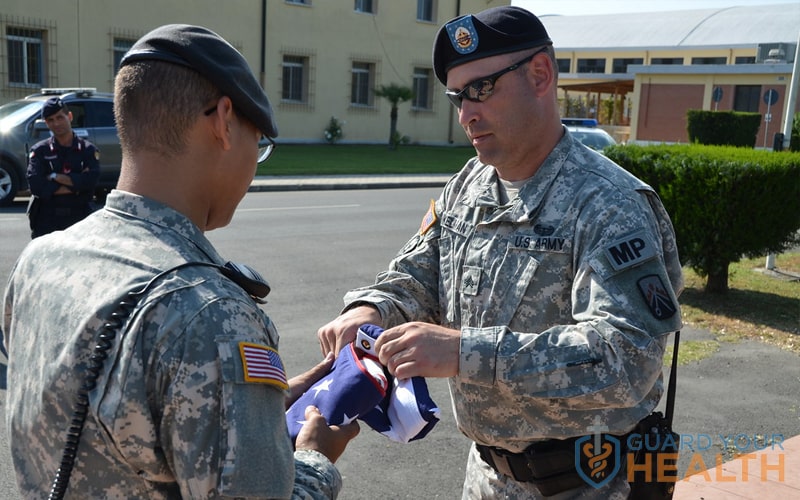 Why Is The Flag Backwards On Military Uniforms?

The American flag backwards gives great meaning. It looks like it is flying in the wind while the wearer is moving forward.

According to the Golden Rule: The Blue Star Field of the United States Flag is placed in the top place of honor.

When used on army uniforms, the blue star field of the US flags must be in the top place of honor.

Based on where the flags are, the highest position varies. The location is in the front of a moving item, such as military soldiers.

The blue star band must face the front. So, military uniforms have inverted flags.

If the military troops wearing the flags are going forward and the field of a blue star is at the front, they will appear to be flying in the wind.

Behind this artwork comes a more profound significance and a historical narrative. Infantry and cavalry regiments had a specific standard-bearer.

This man carried the symbol into combat during the Civil War. It is a highly significant image in the military setting.

It will flow backward and couples with the blue background of stars making headway against the flagpole and the red and white stripes trailing behind.

It symbolizes the courage and dedication of those who served and fought. Nowadays, the backward-streaming look depends on the flags on the right shoulder of army uniforms.

As a result, it is always good practice to have the national stars facing front. Flags worn backward on uniforms were once for paratroopers alone.

These patches acted as an identification mark for land soldiers to identify them from the opponents. It also appeared in situations where the difference was essential, such as multi-national deployments and joint-duty.

These backward American flags did not become a regular part of military outfits until 2003. The right way to wear the US patch is with the stars facing front.

When wearing it on the right, it is traditional to flip the flag to be blowing in the breeze as the wearer walks ahead.

It should be on all military uniforms, including the field, hot, and cold-weather uniforms. A modest version of this is reversed on today’s uniforms.

The brilliant blue, white, and red hues have been replaced with neutral tones, mainly dark green and brown, to blend in with the background. The American flags must be to the right of other flags, such as the USMC flags.

When addressing officers, people may lower the organizational flags in respect during the National Anthem. However, they never do so with the US flag.

Which Uniforms Have The Flag On Backwards?

The US Flag Code had governed the insignia worn by service members and aircraft and spacecraft. On the right arm of the army is a reverse flag.

Navy uniforms Type II and III have a reverse flag on their right sleeve. Like those in the Army, personnel in the Air Force wear the backward flags on their professional camouflage uniforms.

But, they also can wear ones on their flight suits, as does the Navy. The uniforms of the Marine Corps do not have any American flags on them.

The front is the highest honor when presented on a “moving item” such as a person or car. So, it should be on the left side of the vehicle or the left arm.

But, it always is backward when positioned on the right. It appears to be waving in the wind when moving.

If they are not flipped on the right side, the flags can appear backward. The eagle grade of Navy Captains or Colonels follows the same approach.

When the eagles’ heads are on the uniform, they must always face forward, as the forward-facing eagle is the honor in heraldry.

On some authorized US uniforms, the flag is worn on the left shoulder, giving the impression that it is flying in the wind from a flagpole. You can see this in the spacesuits worn by the Apollo astronauts.

Here are some frequently asked questions we have collected while researching this field. Let’s scroll down and collect the helpful information!

Is A Backwards Flag Disrespectful?

While some may wrongly believe that displaying a reverse or backward flag on a military uniform is a signal of contempt, it is a symbol of respect.

Backward flags should only be on an army professional’s uniform as an arm patch placed on the sleeve.

Yes, civilians are permitted to wear American patches on garments in the same way that military personnel does.

Wearing it anyplace else might be considered disrespectful. So, be cautious and remember to follow the guidelines to prevent offending the American flags.

What Does Backwards Flag Mean?

It is not the actual flag but a featured image or symbol with another special meaning. Reverse flags often appear on military uniforms or police cars.

Which Way Should the American Flag Face?

The union should be highest and the national flag right to the observer’s left, whether exhibited vertically or horizontally against a wall.

The American flags must be presented similarly, with the blue field to the observer’s side.

Hopefully, this article is beneficial to you when finding the answer to “Why is the American flag backwards?” If you have any questions about this, please let us know. Thank you for reading!