A tactical pen is a self-defense tool used in various situations. It is a small, lightweight, and easily concealable weapon that can be used to incapacitate an attacker. Tactical pens are legal in most places and can be an effective way to defend yourself. Here are some tips on how to use a tactical pen.

What Are Tactical Pens? 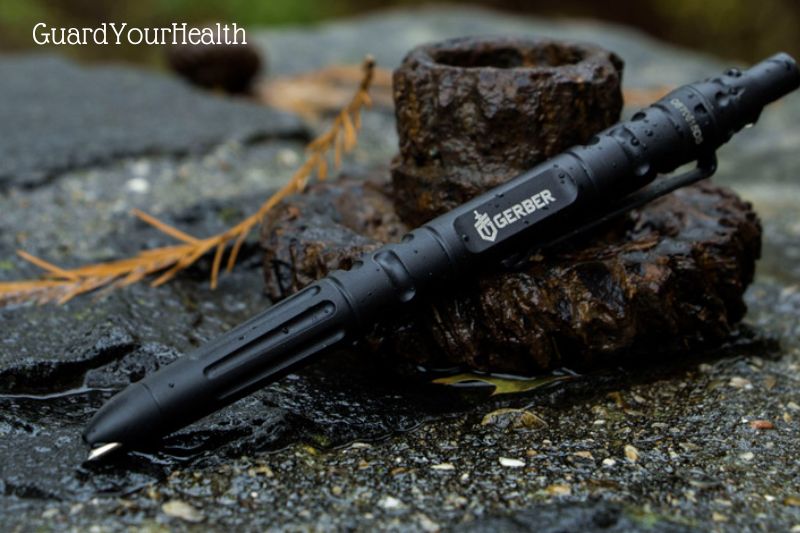 Once seen only in spy movies, tactical pens are increasingly popular. But pens have been around for a while. People who don’t want a gun for self-defense use them.

They also are popular because they can be hidden in plain sight. Tactical pens don’t look like weapons to others. They can save your life if used properly. A tactical pen is a handy multi-tool.

Understanding the Pros and Cons of Tactical Pens 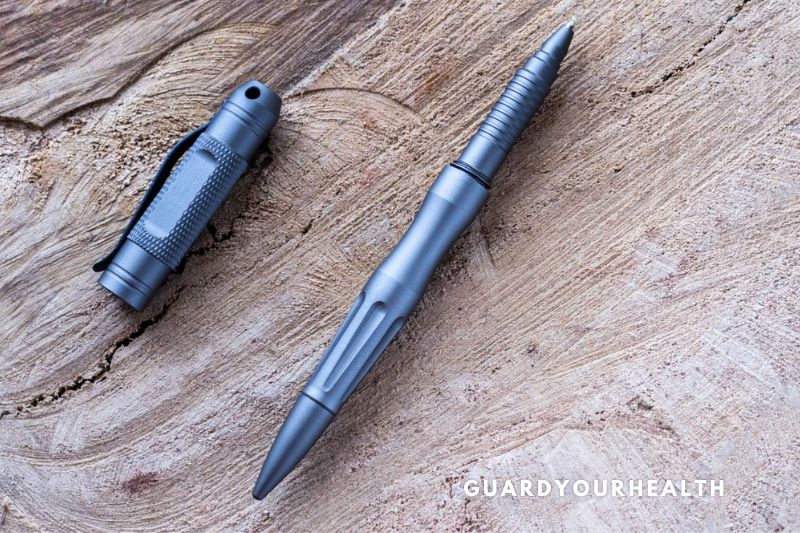 It will help if you comprehend what your weapon is and is not capable of before you start learning methods. You will strive to improve its shortcomings while maximizing its strengths.

As indicated in the introduction, your tactical self-defense pen has one very important advantage: it can travel anywhere, and, as long as it is not blatantly hostile in appearance, it will pass through practically any security screening. After all, it’s only a pen, although a very resilient one.

While traveling to places with very tight gun and knife restrictions or when flying commercially where you aren’t even allowed to bring a nail file, this non-weapon status is equally useful.

A tactical pen may be used as a means of defense to shield your hand from a punch while simultaneously concentrating the force of a hit into a small region of the attacker’s body.

Applying a tactical pen to someone is typically not seen as using fatal force; it is included in blunt or semi-blunt impact instruments like kubotans, yawara sticks, and other impact weapons. Apart from the fact that it may move anyplace, a tactical pen can provide you the best advantage thanks to its element of surprise.

When your assailant anticipates that you, the intended victim, will be unarmed, you may unleash a potent and painful, even crippling initial strike from apparently nowhere by using a tactical pen, which is light, concealable, and quick to deploy.

Your assailant will experience startling agony if you hit with enough force to drive a hardened piece of metal into his bones, muscles, or joints.

The roles have suddenly been reversed! Now that he is responding to you rather than the other way around, you have the option to close the battle or flee.

Tactical pens are neither the finest self-defense tool nor the answer to every issue. Although they have a minimal range and need some expertise to use well, their benefits enable them to travel areas that others using a pen as a weapon cannot.

We’ll go straight to the point in the next part and talk about how to hold your tactical pen correctly before striking your assailant with it. 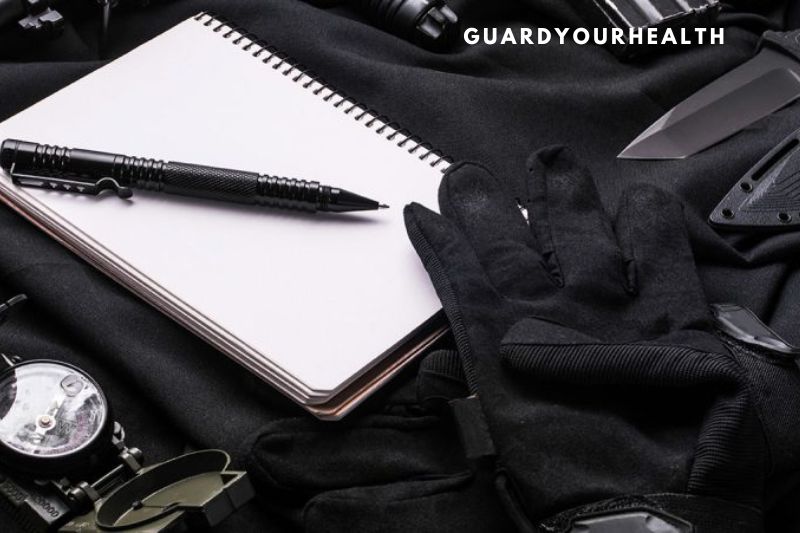 In the past, only military and law enforcement members would purchase tactical pens for use while on active duty. But there are now more tactical pens available than ever because of the growing popularity of survivalists and the EDC (or daily carry) movement.

This also means that the market is now overrun with subpar tactical pens that may look the part but lack the features and degree of performance that you would expect from a genuine tactical pen.

Strong materials like steel or titanium should be used to construct an excellent tactical pen to sustain the force of hitting another person without breaking. The pen’s body should also be substantial enough to grasp it in your palm without sliding easily. A few of them could have spotlights.

Make sure that any other instruments the tactical pen may have, such as a glass breaker, are tightly incorporated into the pen body. After all, you wouldn’t want your tactical pen to shatter amid a stressful circumstance.

The next thing you’ll need is a location to store your tactical pen once you get it. A smart location to keep tactical pens is on your person since most of them will have an integrated clip. I tuck mine inside the left front pocket of my slacks, allowing the tactical pen’s clip to latch onto the pocket to prevent it from falling out.

Other ideal locations are the shirt or coat pocket. It’s also a good idea to keep your tactical pen in an accessible pocket if you often carry a bag. I would be more concerned if a pickpocket reached inside and took your pen while you weren’t looking.

In any event, you must be able to swiftly access this location at all times and immediately pull out your tactical pen. You may practice at home if you aren’t sure about your ability to rapidly remove the pen. 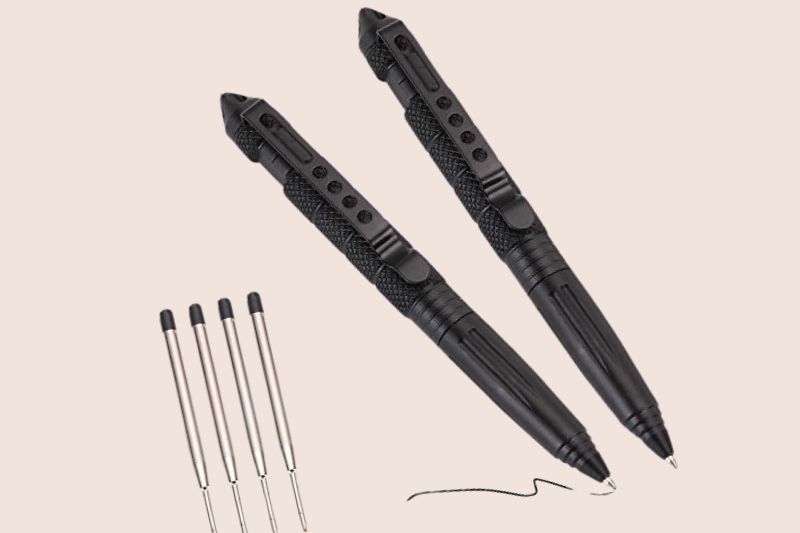 Tactical pens have the advantage of not truly being considered weapons so that you can take them on trips. Tactical pens, however, may still be used as weapons. It is crucial to have a correct self-defense attitude and treat your tactical pen with the same care you would like a knife or any lethal weapon.

Although self-defense instruction does include fighting instruction, its main goal is preventing injury to oneself. And avoiding harmful circumstances in the first place is the greatest method to reduce the damage you cause to yourself.

As a last option, you should never use tactical pens or other weapons of self-defense. We will discuss this in more depth in the following section, but in short, proper self-defense is avoiding or settling confrontations so that they do not have to develop into violence.

Easy Tips: How To Use A Tactical Pen? 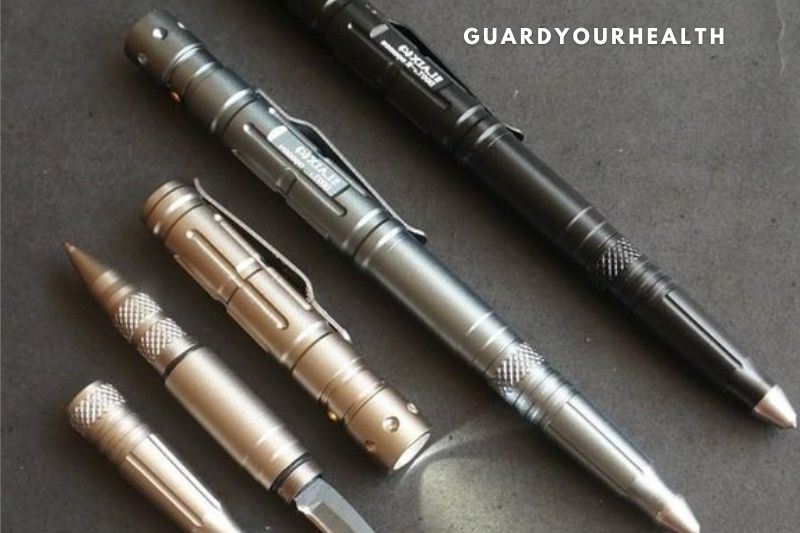 You now have the information you need to utilize your tactical pen properly. To defeat your opponent, use the following strategies.

1. Stay Away From A Violent Situation 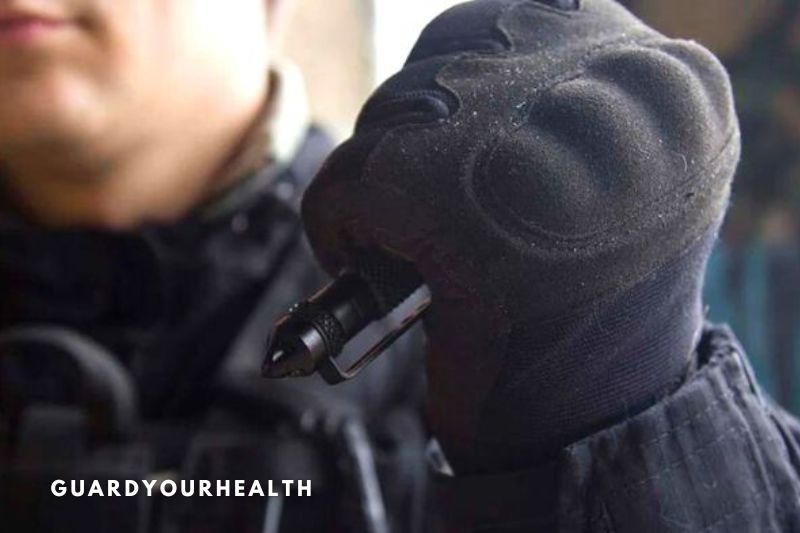 Using a tactical pen to stay out of dangerous situations is one of the finest uses for one. Self-primary defense’s goal is to protect you and do you as little damage as possible.

Avoid gloomy areas as well; shady neighbors will only let you use your tactical pen on paper.

Outside your home, you need to be street savvy, exercise common sense, and be aware of the circumstances.

It’s not always feasible to keep oneself away from violence. Take a minute to survey the room if you find yourself in a dangerous position, such as a robbery, and then respond appropriately.

Remember that neutralizing the issue should be your major goal when doing this. Threaten your assailants verbally or even in response to their requests. If you are fortunate enough to have it turn out this way, get assistance immediately. 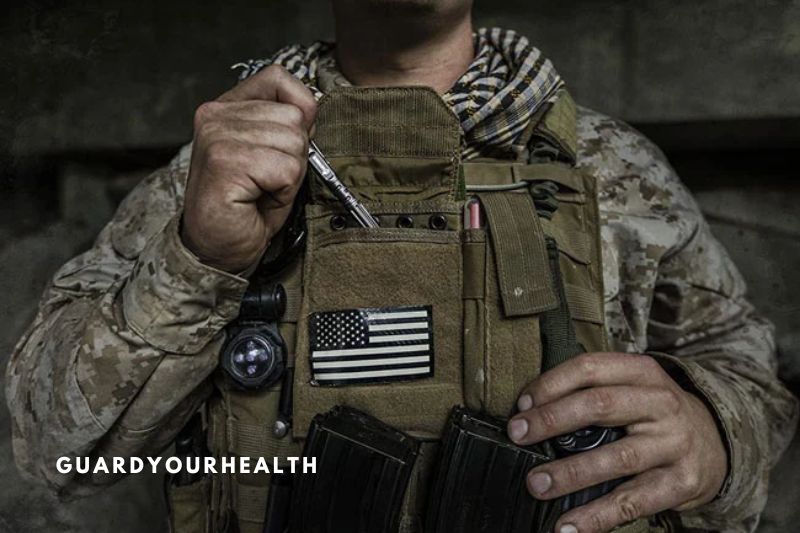 The moment is now to take out your tactical pen. Grab your assailant as they get closer and take note of important information.

Please be aware that the pen’s range and power are both restricted. You need to search for any exposed body parts for them to work.

Your tactical pen may do the greatest harm to these items.

To determine and take your next action, it is crucial to take notice of the attacker’s weapon and posture. 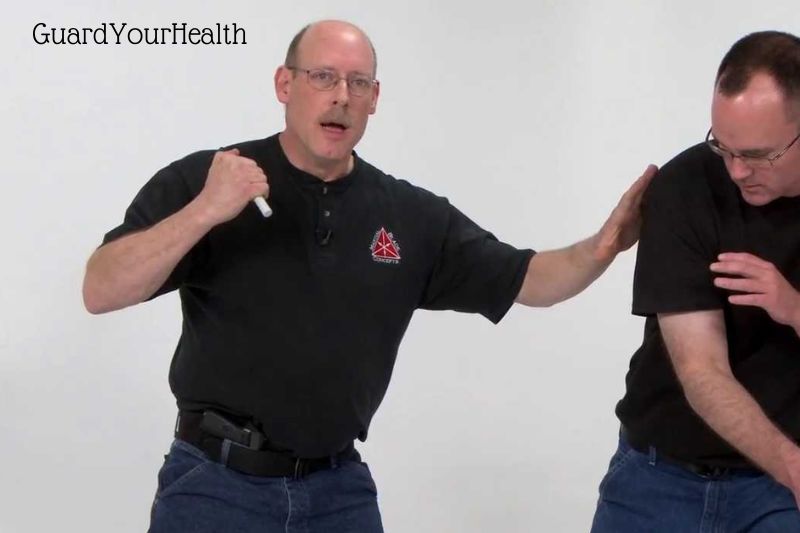 The two things you want most are to escape from your assailant and be hurt. If you haven’t studied martial arts, don’t worry. You may still jab downwardly with your tactical pen.

To make the most of your tactical pen:

Additionally, the grasp facilitates several effective actions, such as direct movements to precisely deliver force across a limited space. Once you’ve dealt with your assailant, it’s time to call for assistance.

Once you’ve rendered your assailant helpless, it’s time to flee and get assistance. Shout as loudly as you can to summon assistance after you are some distance from your assailant. By doing this, you attract attention to yourself and make your assailant less inclined to take action in return.

Please keep running away from your assailant and search for police assistance on your own or with the assistance of a passerby.

If everything goes as planned, you’ll eventually acquire assistance to go to safety. What are tactical pens used for? You’ll also have used your tactical pen to withstand an assault. 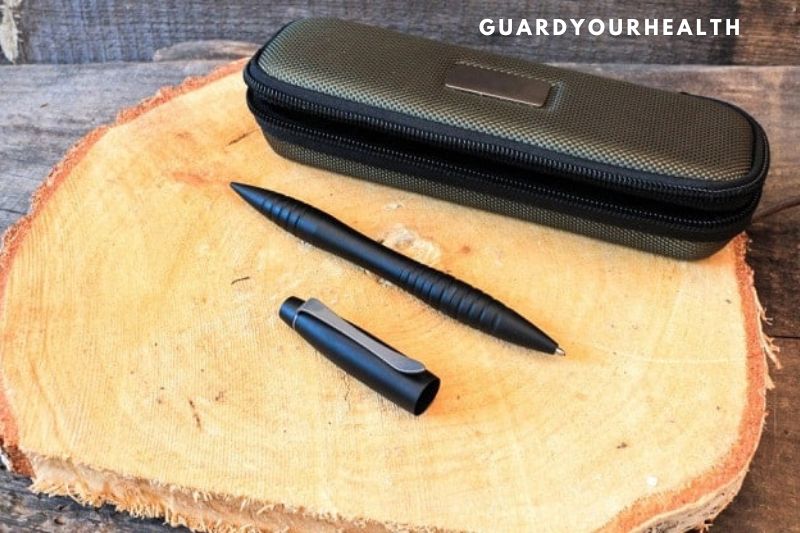 If you ever find yourself in a violent scenario with your attacker, you should aim for important organs and stay away from hard bones. Targeting some of the perfect regions would be;

Although eyes are very weak, you must be accurate to strike the target. Touching your assailant’s eyes gives you access to the brain and other deeper regions.

The throat, esophagus, thyroid, neck arteries, and other important organs are located on the front side of the soft tissue of the neck. The spinal cord has been supported on the rear side, leaving it exposed. Consequently, the neck is a key target location that is often exposed.

For sideways attacks, they are the ideal targets. Once you strike them, your assailant is immediately rendered helpless.

Under the right rib cage sits an exposed essential organ: the liver.

You can use a flashlight instead of a pen to protect yourself; please check out: Top 10 Best Self Defense Flashlight for Budget 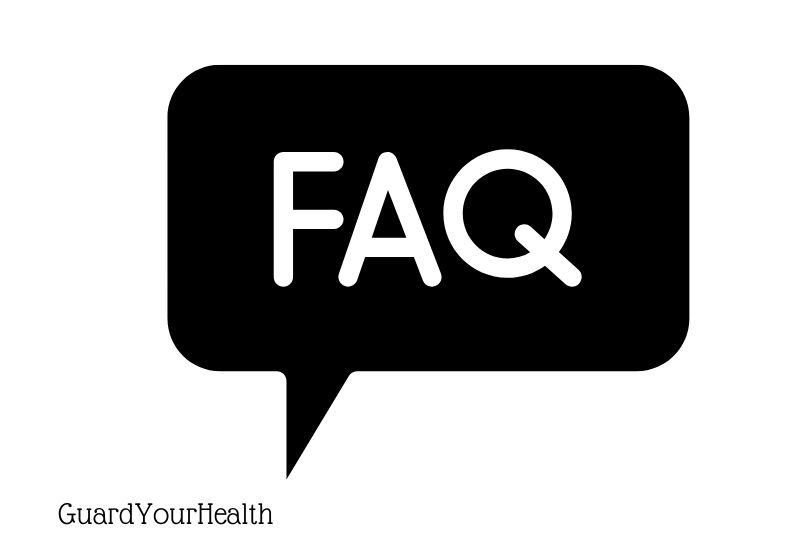 What is the point of a tactical pen?

Can I carry a tactical pen in Canada?

The carrying of a firearm for self-defense is forbidden in Canada. The Criminal Code also states that anything made used or intended to inflict harm on another person, even just threatening or intimidating them, qualifies as a weapon.

Where can I strike a pen with a tactical pen?

Neck. Strikes with a tactical pen to the neck are always effective if executed firmly. The delicate cartilage windpipe in the front, the massive main veins and capillaries on each side, and the spine at the back of the neck are all susceptible.

Why is Self Defense illegal in Canada?

As long as their self-defense measures are appropriate under the circumstances, Canadians have the right to protect their possessions or themselves. This implies that you would have to prove that you had no other reasonable option if you hurt a burglar who broke into your house or other property.